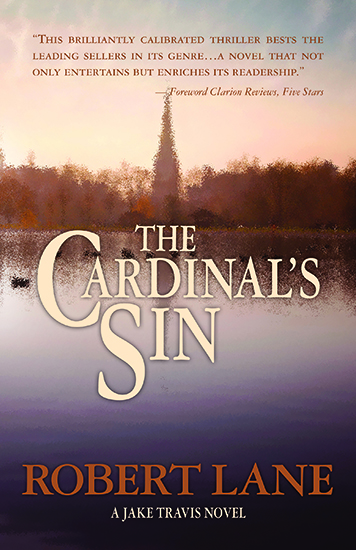 While concluding a European vacation with his girlfriend Kathleen, Jake Travis is given an assignment. Kill an international assassin who targets the loved ones of Special Ops personnel. The assassin is known to dress as a Cardinal and take contemplative strolls in Kensington Gardens. Jake completes his task and he and Kathleen return to Florida where he learns that he “clipped the wrong bird.”

Jake has murdered a popular and progressive Cardinal.

Jake must now track down a woman who can lead him to the real killer, before he strikes again. Kathleen recoils from their relationship upon Jake’s confession of his fateful act, leaving him to agonize whether or not he’s lost her for good. Meanwhile, Jake is obsessed with his struggle to answer the central question he desperately needs to resolve: why did the Cardinal use Jake to end his life?

Finalist for the 2015 Foreword Reviews Book of the Year Awards

“This brilliantly calibrated thriller bests the leading sellers of its genre… A novel that not only entertains but enriches its readership. Lane’s writing is sharp, evocative, and engaging. Lane, through Jake, wrestles questions of cosmological import with skill, outdoing Dan Brown and writers of his ilk as he juggles between theology and mystery.”
—Foreword Clarion Reviews, Five stars

“A cinematic tale… the prose is confident and clear, and the pacing smooth and compelling… readers will care about its characters. Another entertaining mystery from Lane, possibly his best yet.”
—Kirkus Reviews
“Beautifully paced and structured mystery thriller. A strong cinematic element, (an) exciting reading experience… Florida noir at its best. Much of this fine novel provides a moving and sophisticated exploration…in which the killing power of words vies with the powerful finality of the assassin’s craft.”
—Florida Weekly
“… engaging thriller… a compelling, quick-read novel…Jake’s moral struggles are sure to provide more thought than your average thriller on bookshelves today.”
—Blueink Reviews