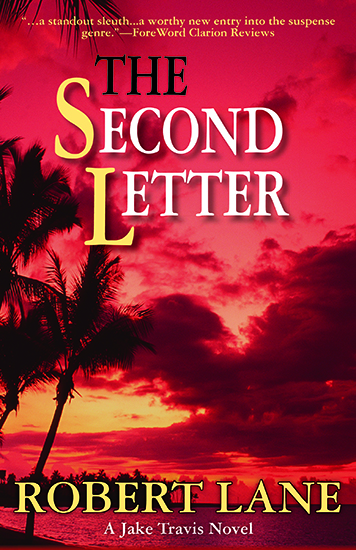 Jake is contracted to retrieve a stolen letter that is a vestige from the cold war era. The letter is in possession of Raydel Escobar, who owns three Tamps Bay nightclubs. Jake and Kathleen attend a fundraiser at Escobar’s, where Kathleen instantly forms a relationship with Escobar’s wife, Sophia, and Jake succumbs to Escobar’s charm. As Jake and Garrett pursue the inscrutable Escobar, they discover he is involved in far more than nightclubs. In his reckless pursuit of the letter, Jake stumbles upon a human trafficking ring. He is soon battling to save lives, and to make sense of a second letter, lost for over 50 years.

Part mystery, part romance, and stuffed with the witty repartee that would become Lane’s trademark, The Second Letter resonates with timeless themes.

“With its solid structure and fast pace, along with a standout sleuth, Lane’s story make a worthy new entry in to the suspense genre… a book whose high-stakes action, mystery, and sparkling characters could easily remain relevant for years to come… the dialogue introduces an appropriate sort of James Bond slickness to the South Florida crime caper…Characterization for that matter, proves to be the most powerful of Lane’s multiple storytelling strengths…”
—Foreword Clarion Reviews, Five Stars
“Lane’s crime thriller features a wisecracking Jacob Travis…with a penchant for breaking the rules… certainly worth the read for fans of the genre… Lane also handily maintains a level of intrigue throughout the book…keeps the story flowing.”
—Kirkus Reviews
“… Lane never loses control of this high-stakes, fast-paced Florida crime-caper. Fans of Michael Connelly, Ace Atkins, and Dennis Lehane will likely find Lane’s book satisfying on how it hits on all the right notes of a truly suspenseful story.”
—SceneSarasota
“… contains splendidly described mayhem… a winning hero in Jake Travis, someone who is super skilled, super fit, glib, oddly bookish, funny as a stiletto… Travis lives in a moral twilight that threatens to plunge him into total darkness.”
—Florida Weekly
“… a captivating book with lies and deceit as well as love and loss.”
—Readers’ Favorite
“… an entertaining read fueled by a riveting story featuring a wisecracking, somewhat reluctant hero… Lane’s story is filled with believable, likable characters, witty dialogue and page-turning drama.”
—Blueink Reviews
“ There’s a new kid on the mystery block. The Second Letter by Robert Lane can settle on the book shelf with other thrillers. Lane not only provides thrills, but does it while keeping his sense of humor…suspense drips from the pages….the reader could not ask for more.”
—BookLoons